With the overall market continuing to drop off a cliff, down 10% YoY and down a significant 35% compared to May 2019 (the last normal May in the market), plugins reached 21% share of the market last month (12% BEV).

The year-to-date (YTD) registrations are now over 122,000 units, keeping the market share of plugin vehicles to 20% (12% BEV). This is already 2 percentage points above the result that the market had in 2021, and is a good 9-percentage-point increase over the 2020 result (11% plugin vehicle share). Expect the market to stay firmly above 20% by the end of the year, maybe even going above 25% by then.

For some powertrains to go up, others need to come down, and that is what is happening to regular petrol and diesel sales. The former (petrol) represented 36% of sales last month, and the latter (diesel) fell even harder, having just 18% of sales. Its sales dove a steep 28% compared to a year ago. At this pace, diesel sales will be dead in just two years.

With Tesla France suffering from a drought of Model 3 supply and a slow ramp-up of Made-in-Germany Model Y, the stage has been left empty for others to shine, and last month’s best seller was again the Fiat 500e, which scored an impressive 2,129 registrations. That was its third record score in a row, leaving the runner-up Peugeot e-208 EV (1,668 units) at a sizable distance behind and allowing a #1 and #2 finish for Stellantis.

Still on Renault, the new Megane EV finally had its first volume month, with 758 deliveries, thus making it three Renault BEVs in the top 10! 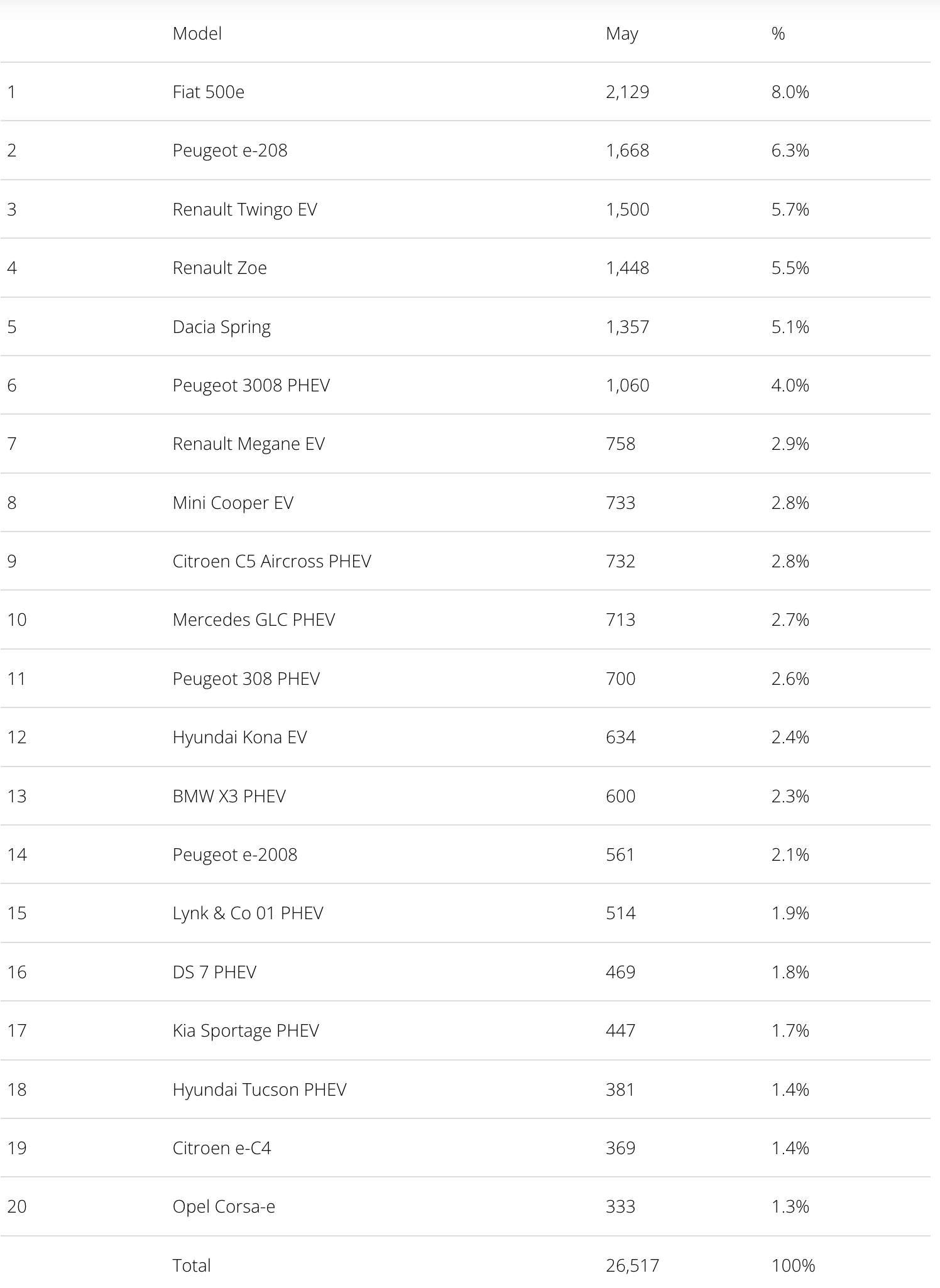 In the second half of the table, we have the Hyundai Kona EV scoring its best result in 23 months, with 634 registrations putting it in #12. The Lynk & Co 01 PHEV had a record score of 514 units, while another crossover, the Kia Sportage PHEV, joined the table thanks to a best ever 447 registrations.

Below the top 20, the Kia Niro EV (257 units) and the MG eZS EV (211 units) had solid scores. We can also celebrate the landing of the VW ID.5, the sportier sibling of the VW ID.4, that started out its commercial career with a strong 287 registrations, allowing it to immediately beat both its siblings, the ID.3 and ID.4, and become last month’s best selling Volkswagen. A sign of things to come?

Looking at the 2022 ranking, previous leader Tesla Model 3 had a steep fall, to just 4th. It was surpassed by the new leader, the Dacia Spring, being followed by the Fiat 500e and Peugeot e-208 EV. Expect a tight race between these four models in the coming months!

In other good news for smaller cars, the Renault Zoe switched places with the Peugeot 3008 PHEV and is now 5th, while the Tesla Model Y dropped five spots, to 15th, to the benefit (among others) of the #12 Hyundai Kona EV and #13 Mini Copper EV. Closing out the top 20, we now have the MG eHS PHEV, thus making it the 4th Made in China model in this best seller table.

Looking at the brand ranking, the top two brands remained stable, with both Peugeot (15.8%) and Renault (12.2%, up 1 point) keeping their gold and silver medals. The latter is closing in on the leader, thanks to a good global month from its BEV lineup. The last place on the podium still remains with Tesla (7.1%), which lost 1.9 percentage points last month due to the aforementioned supply constraints.

As for OEMs, Stellantis is the major force in this market, with a commanding 31.6% share. The Renault–Nissan–Mitsubishi Alliance is sitting comfortably in #2, with 20%, and Hyundai-Kia is in 3rd, with 10%.

Off the podium, we now Volkswagen Group (hey, remember me?) in 4th with 7.6%, immediately followed by BMW Group (5th, with 7.5%). Both surpassed Tesla last month.

Solid Oxide Fuel Cells Are Having A (Big) Moment

Deleting Your Period Tracker? Don’t Forget That Your EV Tracks You, Too (Part 2)