Fuel cell trucks have yet to crack the US market, but it looks like things are about to pop open. Last month Bosch announced a $200 million investment to upgrade a fuel cell manufacturing facility in South Carolina aimed at heavy duty trucks, and now here comes Ford Motor Company with a pilot test for its new F550 Fuel Cell Prototype Chassis Work Truck. If all goes according to plan, the pilot test could open the door to a whole new fleet of fuel cell trucks for Ferguson Enterprises and other stakeholders.

CleanTechnica’s Jo Borrás covered the Bosch news last week, noting that “Bosch has been in the hydrogen fuel cell business since at least 2019, when the company partnered with Powercell to develop fuel cell stacks for vehicles like the Nikola electric semi.”

That fraud scandal upended lots of plans. AB InBev’s Anheuser-Busch branch, for example, was all set to 0rder 800 Nikola fuel cell trucks back in 2018.  GM also eyeballed Nikola to help jump-start its fuel cell truck business in 2020, only to drop the idea like a hot potato after the fraud allegations surfaced.

No wonder US automakers have been skittish about producing heavy duty fuel cell trucks for the mass market. Automakers in Europe and elsewhere are not so shy. Volvo is betting on fuel cells for construction vehicles and other heavy duty applications. BMW, Toyota, and Hyundai are among other companies dipping a toe in the fuel cell truck waters, and a hybrid battery-fuel cell mashup from the startup Tevva is also in the works.

Still, some US automakers have been hammering away at fuel cell R&D, and that has caught the eye of Ferguson Enterprises, a leading distributor of plumbing supplies and heating equipment in the US and Canada. Earlier this week the company announced that it will test Ford’s F550 Fuel Cell Prototype Work Truck in its North American fleet for six months.

“This pilot program aims to evaluate how fuel cell technology will operate within the Ferguson fleet while providing real-world usage data to Ford. Ferguson will provide Ford with vehicle data and feedback about the technology to help Ford better define the engineering requirements for commercial vehicle duty cycles,” Ferguson states.

More specifically, the pilot project aims to explore whether or not fuel cell technology can resolve some issues in the zero emission area for heavy-duty trucks. In the shipping and logistics field, the time spent recharging a battery electric vehicle can present an obstacle. Fuel cell electric vehicles can be refueled in about the same time as a gas or diesel vehicle, an attribute which makes them attractive when time is at stake.

“This data will be used to address ongoing industry challenges within the medium-duty and heavy-duty segments, like battery range and payload capacity, that have prevented faster conversion to environmentally friendlier options,” Ferguson explains.

If you want to spot that new truck, keep an eye on Charlotte, North Carolina. Ferguson states that it is planning for “temporary infrastructure equipment for the duration of the pilot” in that city, presumably meaning a hydrogen fueling station.

Meanwhile, Ferguson is hedging its zero emission bets. The company is also launching a pilot program that involves a total of 30 battery-electric trucks covering classes 6, 7, and 8 trucks.

The Fuel Cell Truck Baby Steps Are Piling Up

Ford’s F550 Fuel Cell Prototype Work Truck could be the trickle that comes before the fuel cell truck flood, if the US Department of Energy’s Super Truck 3 grant program pans out. Last year Super Truck 3 awarded a total of $127 million in grants for five R&D projects aimed at reducing vehicle emissions from medium- and heavy-duty trucks, including four fuel cell projects and one battery project.

Among the fuel cell awardees was Ford, which got almost $25 million to demonstrate five class 6 Super Duty trucks outfitted with fuel cells. Ford was tasked with “targeting cost, payload, towing, and refueling times that are equivalent to conventional gasoline trucks.”

Daimler Trucks North America also got a cut of the funding pot, for the development of two class 8 fuel cell trucks. Daimler is charged with achieving a range and capacity equivalent to a diesel truck.

The electrolysis angle is a key one. It provides for a more sustainable supply of hydrogen than the current go-to source, which is natural gas along. On top of that, GM is expected to demonstrate four hydrogen fuel cell and four battery electric trucks in classes 4, 5, and 6.

The fourth fuel cell grant went to PACCAR Inc., which is among a score or so of truck stakeholders that signed on to the National Zero-Emission Truck Coalition back in 2020. If the name doesn’t ring a bell, PACCAR is the parent behind the familiar Kenworth, Peterbilt, and DAF lines. PACCAR will apply its Super Truck 3 grant to develop 18 class 8 battery and fuel cell trucks, along with a charging station, under the Kenworth and Peterbilt name plates.

For the record, rounding out the five truck-centric R&D projects is a battery-electric class 8 tractor trailer under development by Volvo Group North America, along with a new truck-sized charging station.

Meanwhile, Back At The Fleet

As for the age-old question of batteries versus fuel cells for zero emission mobility, fleet owners are on the prowl for new technologies that enable them to cut emissions from their carbon balance sheet. Ferguson, for one, is keeping an open mind. They are also aware that their purchasing power could help accelerate the market for zero emission trucks.

“As we reviewed emissions from our fleet, we realized our scale in the industry provided us with an opportunity to invest in and test new technologies. Participation in Ford’s pilot program will provide further learnings as we work to convert Ferguson’s fleet more efficiently,” explained the firm’s VP for  Environmental, Social and Governance, Denise Vaughn.

“Ultimately Ferguson’s investment in new technologies will set the industry standard for private fleet conversion, driving an expansion of the country’s refueling infrastructure,” she added.

Ferguson CEO Kevin Murphy also weighed in on the topic of diverse technology.

“We are pleased to announce this innovative collaboration with Ford to help improve alternative fuel options in their medium-duty fleet, in line with our overall corporate sustainability strategy to reduce our Scope 1 and 2 emissions,” he said.

As for Ford, it seems to ready to ride the wave of fuel cell trucks.

“This collaboration with Ferguson is a strong example of where our Ford Pro business and the potential of fuel cell propulsion systems might address the application gaps that battery electric vehicles just can’t fulfill,” said Jim Buczkowski, the executive director of Ford Research and Advanced Engineering.

“The potential of hydrogen, the most plentiful element on the planet, coupled with fuel cell technology has tremendous potential to power larger, heavier commercial vehicles while still delivering zero tailpipe emissions,” he concluded.

If you noticed that everyone is emphasizing the application to trucks instead of passenger cars, that’s no accident. Although fuel cell cars are beginning to catch on in some parts of the world, the US market still has a long way to go. If you have any thoughts about that, drop us a note in the comment thread.

Photo: This could be the first of many fuel cell trucks to roll off the assembly line at Ford (photo courtesy of Ferguson).

Every new passenger car sold in the world will be electric by 2040, says Exxon Mobil CEO Darren Woods 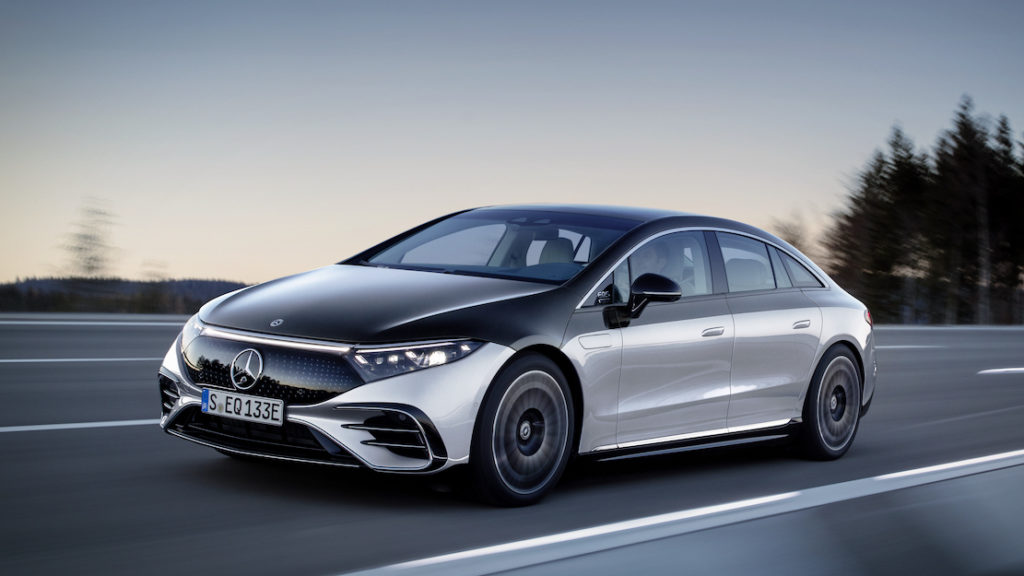